View of the exhibition, mixed media,

The end product of a residency is the moment in which the artist finally unveils their work. After spending a month at the Château de Sacy, Juliette Dominati invites us to enter into her painting exhibition. The young plastician is a collector of objects and of images, her work characterised by appropriation, construction, and addition. As with patchwork, the different elements that make up her work don’t assume proper meaning until the moment when they are installed together and baptised with the same name. In the case of this residency, that name is Pince-mi et peins-moi.

When Juliette Dominati takes up residence in a workspace, she fills it with everyday objects and discarded odds and ends. In order to do this, she roams through her environment, along roads, in and out of second-hand shops. This urban harvest is not performed in any organised way, consisting instead of a gathering of items through chance encounters. Neither the history of an object nor its symbolic role are of interest to her. Each object acts purely as a medium for her work, acting in the same way as a blank canvas. The criteria which govern her choices are of a formal character: the artist might be attracted by an object’s form, its texture or perhaps its colour. At Sacy, the search turns up wood, polystyrene, sticky tape, string, a lamp, a cushion from a garden chair, a stuffed fox, children’s toys, a carpet, two glasses, a vase and a bag.

After having amassed these props, she gathers them together in her workspace. This process is then repeated until the space is full of objects. It is rare that she leaves an object alone, her desire to decorate it is too strong. Her adaptations might take the form of cutting off various parts, the addition of a covering of material or a skin of plaster, etc. Usually she covers a part, or the entire object, in paint. The softness of the pastel shades which are used stands in stark contrast with the precariousness, the fragility even, of these structures. Juliette Dominati plays with these tensions and imbalances.

In the same way as for these items, she also sets out on a quest for designs by exploring the streets and searching in books, on Google or perhaps on Instagram. It is an insatiable exploration that nourishes her, and it is only when she is full that she begins to paint.

On one of the painted objects found in Pince-mi et peins-moi, Juliette Dominati appears to invoke the history of painting in the 1960s. On the wall of the bourgeois sitting-room, the artist has fastened the padded cushion of a sun lounger, cadenced with blue and white vertical stripes. On this surface she has added an irregularly-shaped light yellow blotch. An unusual reminder of the stripes of Daniel Buren, its austerity compromised by the nature of the material involved, and the coloured flat tints of Color Field painting. Asked about the piece, Juliette Dominati maintains, amused, that it was not premeditated. She has no doubt embraced this narrative due to the continuous process of consultation, fragmentation and juxtaposition. This individual piece of work is itself only a fragment of her installation. Inside the latter, the visitor must be able to meander freely. The various nooks call on the visitor to approach the objects more closely, to commit their body in a more intimate way. The whole constitutes a gathering together of visual propositions which deliberately distance us from all authority. She wants to recreate and to bring her daily experience alive for the visitor, to allow the visitor to become familiar with her wanderings through the streets during which her gaze is attracted by details and by moments of life.

Finally, with Pince-mi et peins-moi Juliette Dominati suggests an immersive and transient still life that doesn’t hide its fragility. She has decided moreover that all of the elements that have been gathered will return to the place where they came from - the streets, the waste collection. A final comfort for the artist: the temptation to create relics is avoided. 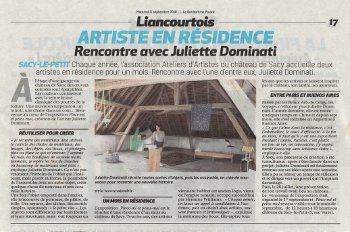